“There’s no one like Rachel”. Joshie’s father Chris tries to put into words why Paediatric Physiotherapist Rachel Thomas deserves a Juiced TV Super Hero Award, proudly supported by QSuper. “We trust her implicitly”. For the past five years Rachel has been on Joshie’s side, helping him become the strong six-year-old he is today.

Joshie was diagnosed with cerebral palsy at the age of one. His parents knew their son’s life would be met with obstacles. “Any parent is protective of their kid but I’m extra protective of Josh”, Chris explains. “Just because he doesn’t have the ability that others have. I’ve got to be really aware of not being a helicopter parent, but at the same time I want to be sure that he’s alright”. And he would be, with Rachel being part of the family’s journey from the very beginning. Chris speaks of an instant kinship between the two. “Pure relation and adoration from both sides. She is almost like this other mother figure”.

Rachel is part of the Queensland Paediatric Rehabilitation Service (QPRS) team at the Queensland Children’s Hospital. She guided Joshie through multiple episodes of Botox treatment, two intensive blocks of therapy and ongoing rehabilitation to help him walk again. Now he runs and jumps everywhere he goes. Even with the limitations COVID-19 has imposed on therapy workers like Rachel, she has continued to oversee Joshie’s therapy via phone and email, ensuring he continues his road to recovery.

When Chris heard about Juiced TV’s Super Hero Awards, it was a no-brainer. “Her support has been so important to us – she has been wonderful. It’s reassuring and it’s lovely to watch Joshie and Rachel’s connection from a parent’s point of view, and to know she’s got his best interests at heart as well”. The family nominated Rachel for the award, making her the 7th winner to receive ‘superhero status’.

Rachel is very touched to receive the award. “I don’t do my job to get awards, I do my job because I love what I do and for me it’s enough just to see the kids improve and be the best that they can”. In her eyes, she is not the superhero, Joshie is. “He is an absolute champion. I don’t think I have ever worked with a child who works so hard and enjoys it. The most memorable for me is probably the first time he jumped on his own two feet. To just look at Joshie and him being just so proud of himself. The sky’s the limit for that kid; he has got the best attitude and a growth mindset without even having to be told”. 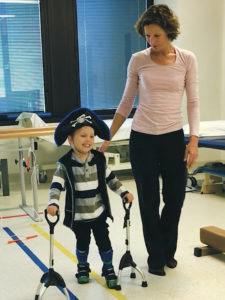 Rachel celebrates her superhero Joshie and Joshie celebrates his superhero Rachel. A real kinship, as Chris mentioned earlier. “Joshie is definitely our little superhero”, he adds. “But it was Rachel who helped him become one”.

Congratulations Rachel Thomas! If you have a Super Hero at the hospital, help us to give them the recognition they deserve by nominating them for a Juiced TV Super Hero Award.